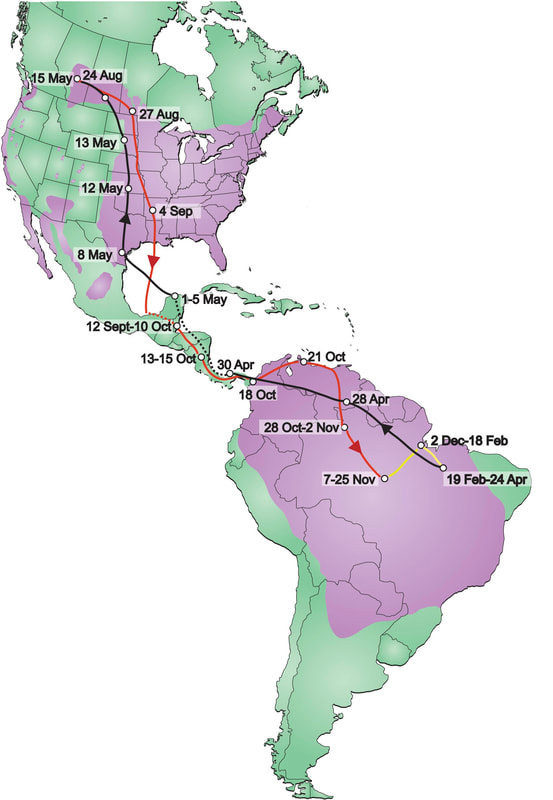 Amelia, a Purple Martin recaptured as a two-year old female, was banded as a nestling at Ellis Bird Farm in 2011. A geolocator was attached on June 13, 2012 and she was recaptured on May 15, 2013. The geolocator was sent to Dr Kevin Fraser of York University, who analyzed the data.
Amelia traveled 21,000 km over spring and fall migration. This is the longest migration distance that York University has ever tracked a Purple Martin (the average annual distance for previously tracked birds is about 14,000 km). Alberta martins breed further north than other birds that have been tracked, so it was expected that they would have a longer migration distance. But until now, no one knew where their wintering sites are located.
Amelia had three different wintering roosts in the state of Para, Brazil. She did not overwinter in the heart of the Amazon where other eastern martins have been tracked to, but rather she chose areas further east where there is more agricultural development. Later in the winter, she roosted near to the Atlantic coast. This is also where she began her spring journey, making her spring migration distance very long (about 10,200 km). If one adds the distance traveled between wintering roosts, this bird logged an impressive 22,300 km over the course of the year!

For spring migration, Amelia left what seems quite late on April 25 but rocketed all the way back to Ellis Bird Farm in just 21 days! Her average flight speed was 600 km a day. She made a four-day stop near the tip of the Yucatan Peninsula before making a direct crossing of the gulf.

She also crossed the gulf on fall migration. Her fall migration was much longer, totaling 75 days. Contributing to this longer duration was a 28 day stop in Belize. Some other martins have similar long stops in this region and through our analysis of feather samples, York University researchers suggest that Central America is an important stopover area where martins undergo their molt.
All photos and published works on this website are copyright Myrna Pearman unless otherwise noted.
Re-posting these images or publishing is not permitted without Myrna's written consent.
Copyright Myrna Pearman Publishing 2022- Site design and maintenance by Carolyn Sandstrom