I have spent many pleasant hours muskrat watching. Time spent in the company of these industrious little rodents is so rewarding, especially at this time of year when they are highly active and often use ice edges for feeding and grooming.

Muskrats are large, semi-aquatic mice and get their name from specialized musk glands.  One of the most widely distributed mammals in North America, they can occupy any wetland that is shallow enough to permit the growth of their aquatic food (cattails, bullrushes etc.) but is deep enough so that it does not freeze to the bottom during the winter.

Muskrats use their dexterous and hand-like front feet to dig out roots, burrow and hold their food. Their huge hind feet are not webbed, but have four long toes, each fringed with specialized hairs that act as paddles. Their tails are thin and flattened vertically.

Muskrats have two types of homes – lodges and bank burrows.  Bank burrows are excavated while lodges are built by heaping mud and plant material into a mound, into which a chamber and one or two exit burrows are excavated. After freeze-up, they will also create feeding and resting stations (called push-ups) by chewing holes through the ice and topping these holes with vegetation and mud.

Muskrats are able to swim for long distances, thanks to the buoyancy provided by their luxurious waterproof fur. They are also efficient divers, able to hold their breath underwater for up to 15 minutes. During the winter, they can travel considerable distances under the ice, locating their food and then returning with it to a push-up – all in total darkness!

Muskrats are promiscuous, with males competing fiercely for females. These battles are easy to observe at this time of year, as many of our wetlands are either melted out or ringed by open water. Although I have not yet been able to capture any good photos of these altercations, I can confirm that they are vicious!
Female muskrats can have up to three litters per season, with five to 10 young per litter. The kits, born blind, naked and helpless, develop rapidly: within a week they are furred; by two weeks they explore on their own; at three weeks they are weaned; and by six weeks they are independent. Their lives are harsh and short; few muskrats live to be older than three years of age.

​Muskrat populations fluctuate, with by a dramatic decrease occurring every few years. It appears that a population crash occurred three to four years ago, as very few muskrats were seen in local ponds. Last summer their numbers started rebounding, and I am heartened this spring to see that many potholes and small wetlands are once again busy with muskrat activity. ​ 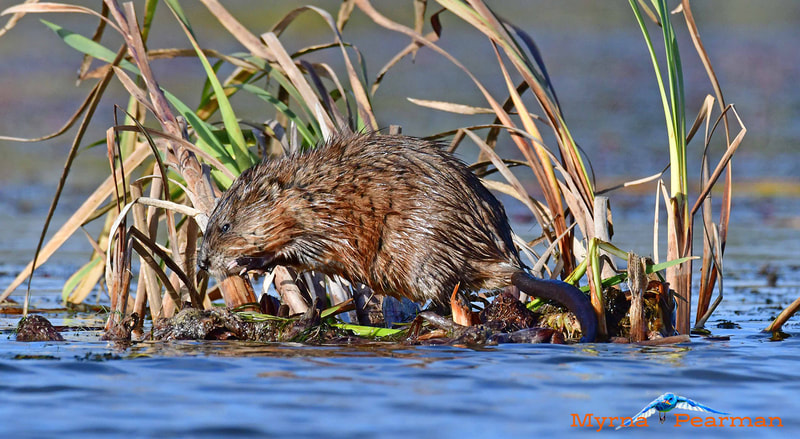 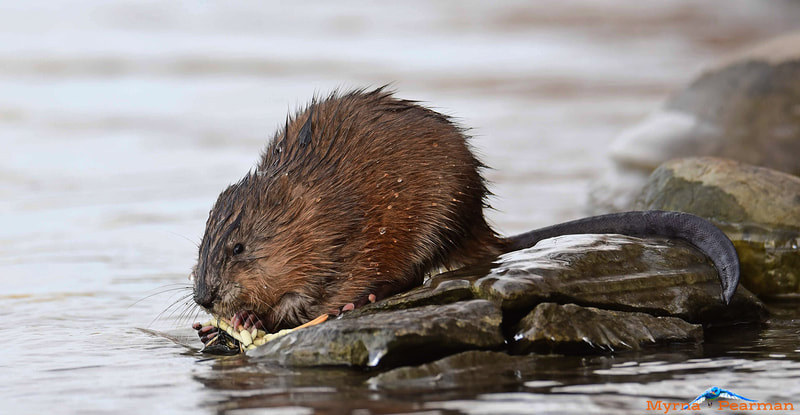 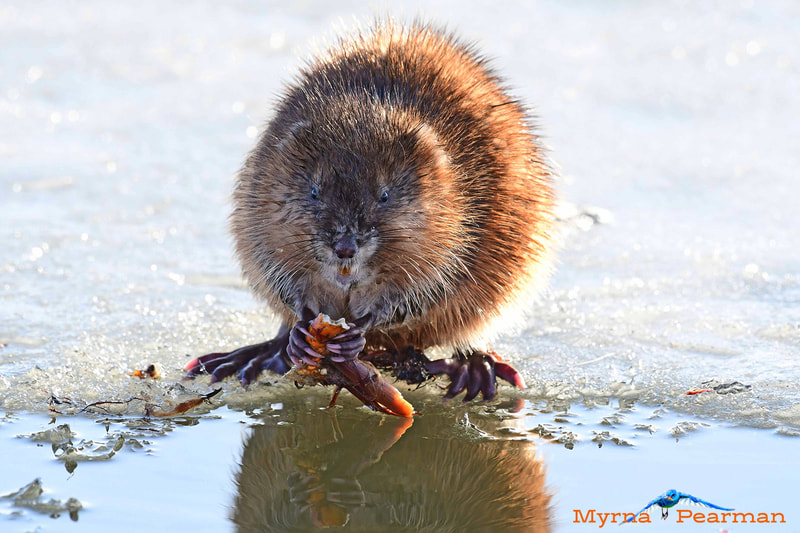 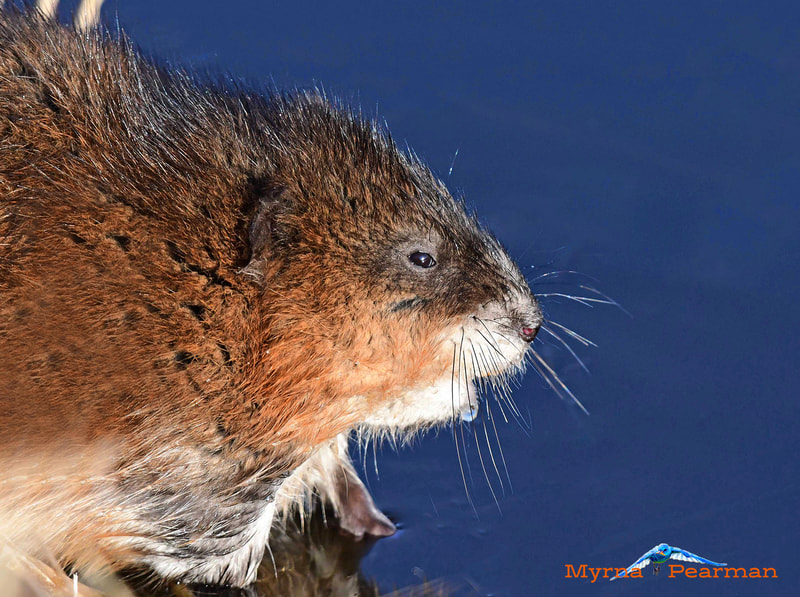 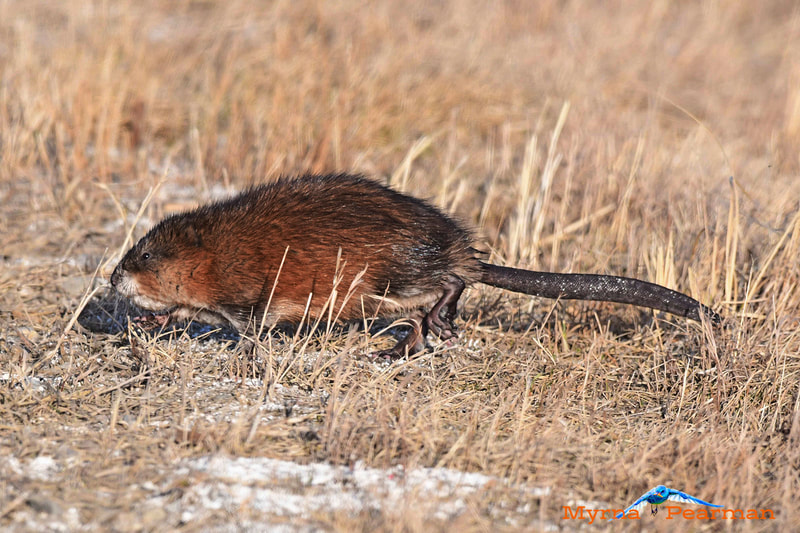 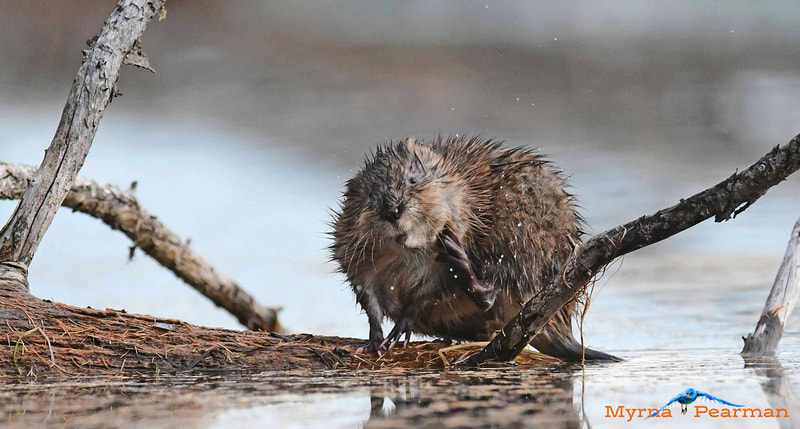 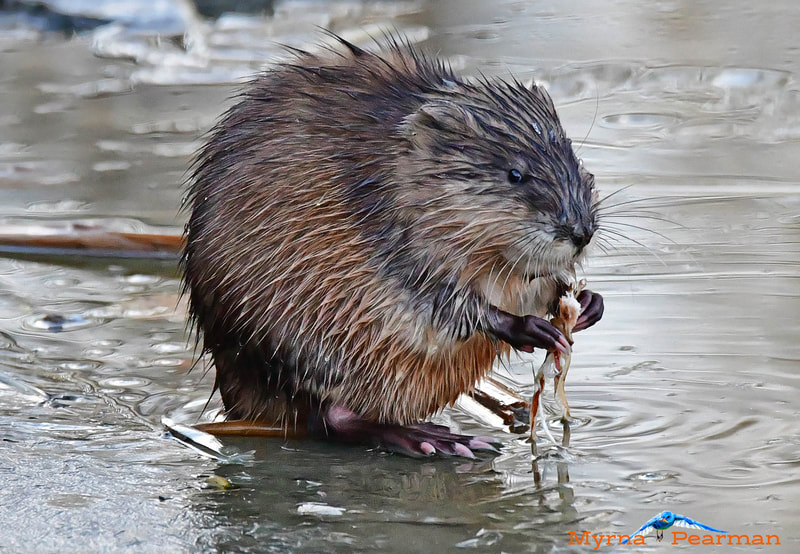 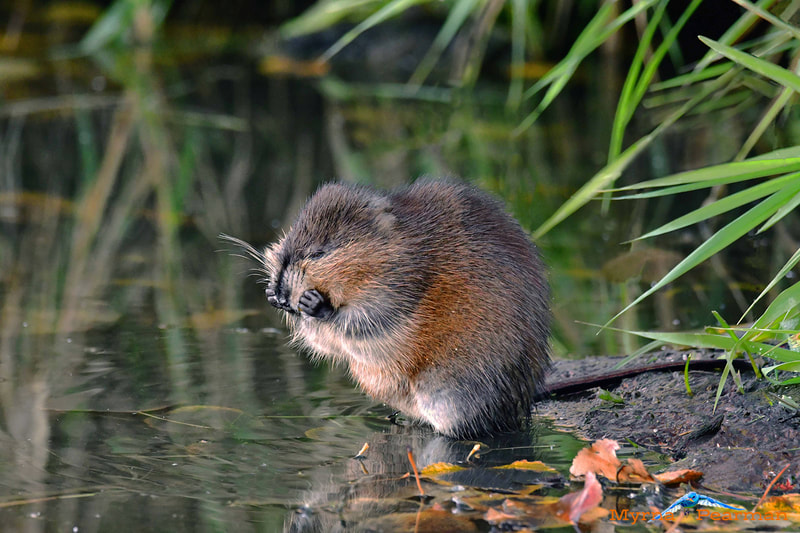 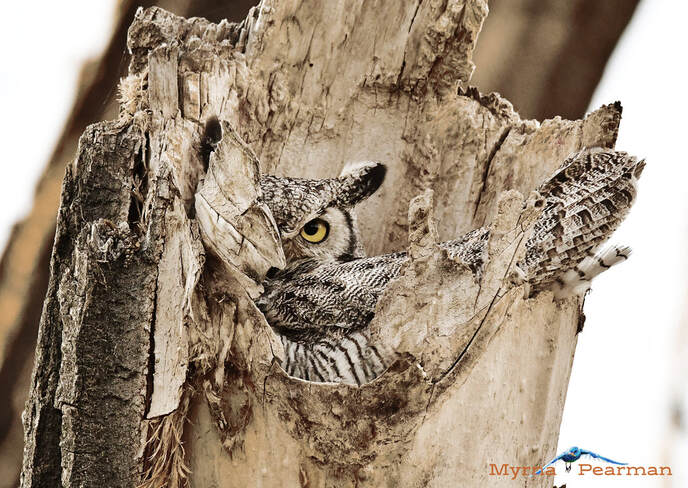 Although Central Alberta could have benefited from a deeper winter snowpack (let’s hope we get some dousing spring rains), it is uplifting to welcome the early return of warmth and life.  The last remaining snow banks are melting, the ponds and rivers are starting to open up, and the pussy willows are erupting.
While I have yet to see a Mountain Bluebird, reports of first-of-season sightings have been pouring in since the earliest report was made of a male near Delburne on March 12. Since that time, images of bluebirds have been posted on social media from locations all around the province.
There are so many other signs of spring in Central Alberta! At the time of writing (March 25), I have observed that the Richardson’s Ground Squirrels, beavers and muskrats are out, the Snowshoe Hares are starting to turn brown, Common Ravens and House Sparrows are hauling nesting material, and Bald Eagles and Great Horned Owls are on their nests. Spring migrants are also starting to appear, especially the Canada Geese, which have arrived back in droves and are squabbling over wetland territories. Other early migrants include Northern Pintails, Red-tailed Hawks, Rough-legged Hawks, American Robins, Tundra and Trumpeter Swans, Dark-eyed Juncos and American Tree Sparrows. Most Common Redpolls, which over recent weeks had become increasingly tetchy with each other, have departed for their Arctic nesting grounds.
The Downy Woodpeckers in my yard are scrapping, the House Finches are singing enthusiastically, the Black-capped Chickadees have been issuing their cheeze-burger songs, male Northern Saw-whet Owls are singing their toot toot toot arias, the Northern Flickers have been kee keee keeing from the treetops, and our resident Pileated Woodpecker has found a resonant snag to tap out his distinctive Morse-code messages of love.
Within the next days and weeks, we will expect more and more migrants to start flooding back.  If you are an observer of nature, I recommend you join the Red Deer River Naturalists Facebook group and share your first-of-season bird—and other spring—sightings! 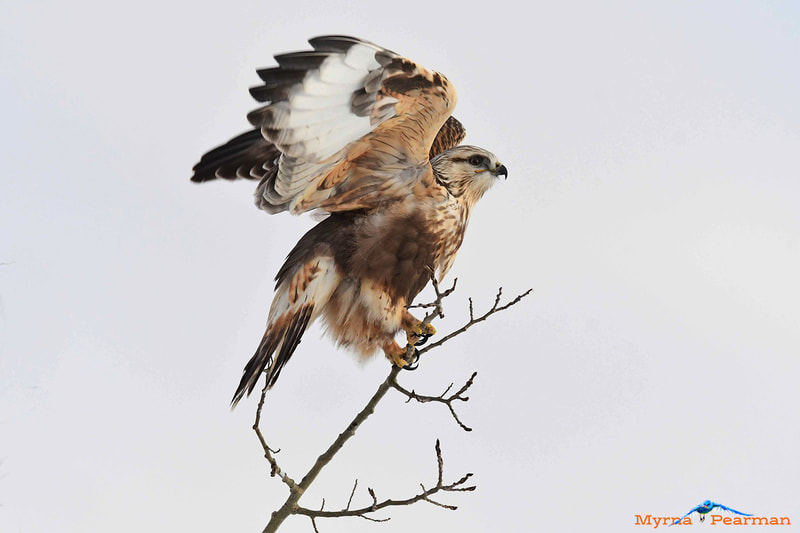 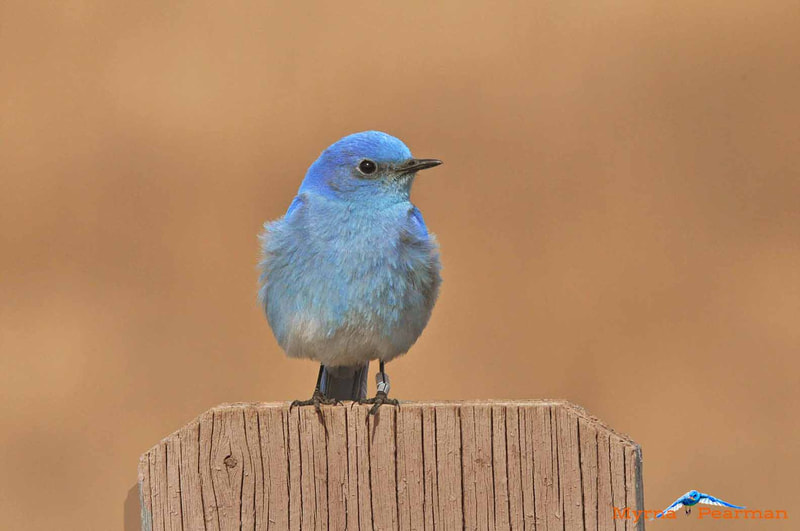 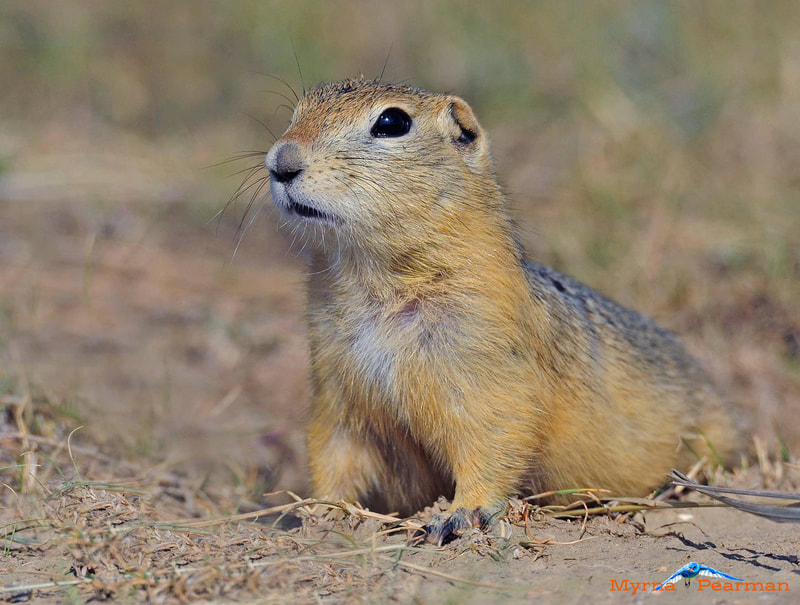 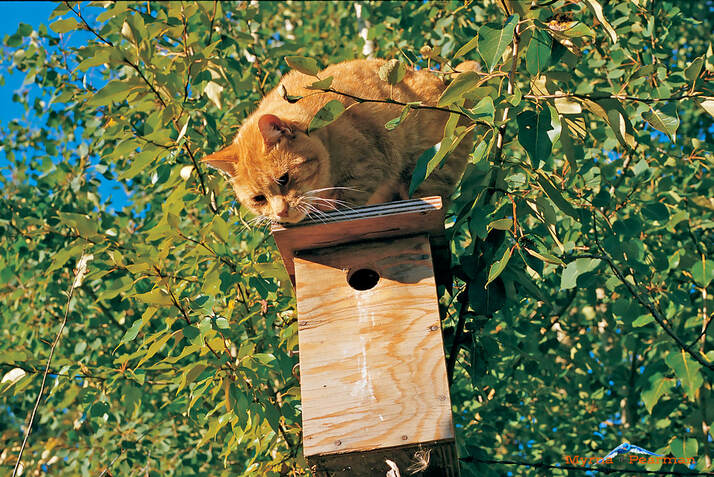 The City of Red Deer recently asked for input into their future animal bylaws. They were seeking citizen feedback about keeping animals in the city – “everything from cats to bees to chickens.”
I don’t have much to say about bees or chickens, but I have done enough research over the years into the cat-wildlife issue that I feel qualified to share some facts. The City updated their cat bylaw in 1996, but state that it needs updating to address current issues.

When I wrote the book NatureScape Alberta: Creating and Caring for Wildlife at Home in 2000, the issue of cat predation on birds was just starting to be taken seriously, with several organizations across North America starting to raise the alarm bells. By the time I wrote Backyard Bird Feeding: An Alberta Guide fifteen years later, the issue was well-researched and several conservation organizations around the continent were publishing research papers and launching education campaigns to encourage the public to fully appreciate the seriousness of the situation.

Before I go further, I want to stress that I am not a cat hater. I am BOTH a bird lover and a cat lover. The information I share here is not to disparage cats or cat owners, but to help raise awareness about the very serious ecological threat posed by free-roaming cats.

Scientists now have declared that outdoor domestic cats are a recognized threat to global biodiversity, having contributed to the extinction of 63 species of birds, mammals and reptiles in the wild. Predation by domestic cats is the number-one direct, human-caused threat to birds in the U.S. and Canada and fact, the ecological threat posed by cats is so critical that the International Union for Conservation of Nature (IUCN) lists domestic cats as one of the world’s worst non-native invasive species. It is estimated that 100 to 350 million birds are killed annually in Canada by five to 10 million outdoor cats.

Over the years, I’ve given many presentations about backyard biodiversity. When I talk about cats, I stress three points:
1.       Cats kill even when they are well fed: their predatory instinct – which never shuts off - is not associated with food.
2.       Bells and declawing don’t work—declawing is cruel and declawed cats can still bat birds out of the air. Bells are useless because cats learn to move without activating the bell. And birds have no idea that a bell means danger until it is too late.
3.       Even if a cat catches a bird and the bird gets away/is pulled from the cat’s mouth, the bird’s skin has likely been punctured and it will die anyway due to bacteria transmitted from the cat’s mouth.

Letting cats roam unsupervised outdoors isn’t just bad for birds (or small mammals, reptiles and amphibians); it’s bad for the cats too. Disease, getting run over by vehicles, getting eaten by coyotes, foxes and owls, and contracting diseases are just a few of the threats that outdoor cats face. There is no doubt that indoor cats live longer and happier lives than outdoor ones.

The solution to roaming cats is quite simple – keep cats indoors or let them be outdoors on a tether or leash or kept in an outdoor run. These outdoor runs, often called catios, are easy to build (an online search will yield hundreds of plans) represent a win-win situation because they protect wildlife while still giving the cats the opportunity to enjoy being outside.

Let’s hope that the citizens of Red Deer gave informed feedback on the issue of roaming cats, and that bylaws will be updated to both protect biodiversity and respect cats and cat owners.  For more information on this issue, some good websites to start with are https://abcbirds.org/program/cats-indoors/cats-and-birds/ , http://www.ace-eco.org/vol8/iss2/art3/#estimated and https://catsandbirds.ca/ 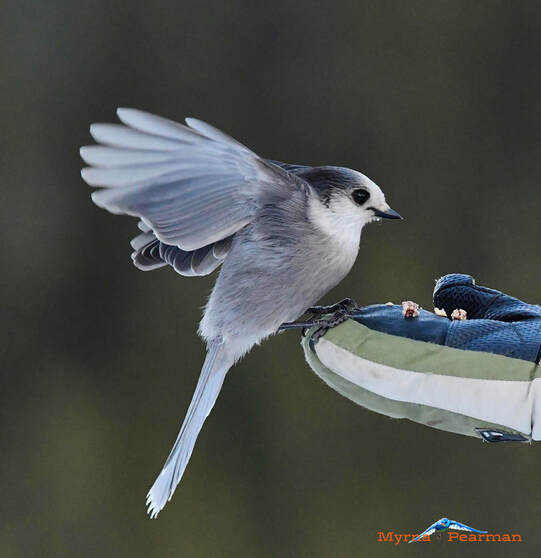 Four years ago, I wrote a column about the Gray Jay, a bird that had received a lot of recent publicity because the Royal Canadian Geographic Society—after a two-year, country-wide search—announced that Canadians had chosen the Gray Jay as our national bird.  In a widely publicized contest, the Gray Jay was chosen over Black-capped Chickadee, Common Loon, Canada Goose and Snowy Owl.
A team of ornithologists (who called themselves Team Canada Jay) then set about getting the name of this species changed from Gray Jay to Canada Jay, a name it held until the American Ornithologists’ Union lumped it with the Oregon Jay and renamed them both Gray Jay in 1957. The campaign was successful, with the American Ornithological Society (which the AOU is now called) restoring the species’s official common name in 2018.
The next hurdle for Team Canada Jay was to get the federal government to ratify the naming in parliament. Sadly, this has not yet happened, much to the frustration of the team as well as many Canadians. A total of 106 of the world’s 195 countries have official birds.  Our country has many national symbols, including a national horse. But, alas, no official bird!
The team has written a promotional book entitled “The Canada Jay as Canada’s National Bird” that will be mailed to federal politicians in March. They will also be launching a web site to accompany the book’s release. Senator Diane Griffin is going to put forth a motion on this matter to the Senate after the book’s release, with much fanfare and media attention. 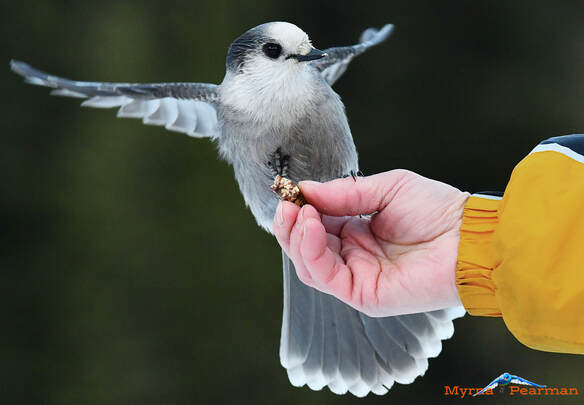 In an attempt to push parliament to act, Team Canada Jay is asking Canadians to sign this petition: https://www.change.org/Repatriate_the_Canada_Jay. The team is hopeful that the federal government will finally ratify the naming and announce the official designation by next Canada Day, July 1, 2021.
While Canada Jays don’t nest in the City of Red Deer, they are common within a half-hour’s drive north and west. And most people who have camped, hiked or skied in the west country or mountains have experienced the delight of being accosted by these intrepid beggars.  It is truly a quintessential Canadian Bird.
Let’s hope that Canada will soon have our own official bird—the Canada Jay! ​